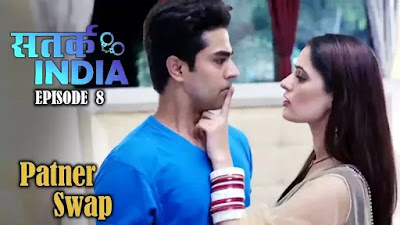 Kundali Bhagya is a Hindi romantic Indian Tv show where Karan holds Preeta responsible for his father’s death because of Sherlyn and Prithvi. To avenge this, he marries Preeta, but fate keeps bringing them together.

Today’s Episode: In this lockdown ke kisses, We are uploading the written update of Kundaly Bhagya that Preeta tells Srishti that Rishabh has gotten kidnapped. While trying to save Rishabh, Preeta gets into trouble. Srishti tells Karan that Preeta and Rishabh are in trouble. Karan promises to save both of them, and Sherlyn hears their conversation.

Preeta to Srishti: When we were in the market, I got a message from Mahira, in that message, I did some pictures of Mahira and Karan’s pictures and went to the side to see their pictures, And when I saw the Pictures of Karan’s then I see someone is kidnapping Rishabh and taking them.

Srishti was shocked after hearing that Rishab got Kidnapped then Preeta says shut your voice down if Mom will listen that then we will in a trouble. Then Preeta says I am in a hotel where Rishabh Ji was kidnapped I will chasing them who kidnapped Rishabh. I am just in front of Rishabh’s room where he is now Kidnapped.

Don’t worry I bring Rishabh with me. I am doing something big. I am damn sure if I do this Rishabh will safe I am sure that my plan will work. Then Srishti says Di Did you Know? How big risks you take? You are going alone to chase the kidnapper to save Rishabh.

And I am madly thinking that you are going to Luthra’s house. And I am stupid that I already told Sameer that you are going to take the Luthra’s class. Srishti Don’t talk like nonsense I don’t have time. I have to go inside to save Rishabh from those kidnappers. Then Srishti forbids Preeta to go inside. The kidnappers may be dangerous you don’t go alone inside to save Rishabh. And they debate on this topic for some time.

You don’t have to go inside alone I am reaching there then we both go inside and save Rishabh from kidnappers then Preeta says no you should be late and I have not timed left. When you reached here I should be saved Rishabh from those kidnappers. Listen I’ll give you 10 minutes If I will not call you back in 10 minutes then you will come here.

But I am a little happy that trick now I am going to use this will surely work and I will save Rishabh from those kidnappers. Listen I love you… I love you more Di… I will exactly wait 10 minutes if you don’t call me in 10 minutes then I will reach there. Bye

Then Srishti set an alarm of 10 minutes then she called Karan sir and tells that Preeta is going to save Rishabh from those kidnappers in the hotel. Karan sir did not pick her call then Srishti says why I called Karan why he picked up my call today. Today her marriage and why he attending my call. He should be busy in his Marriage.

Then Mahira asks Sherlyn to come to the terrace I want to talk something about Rishabh. Then Sherlyn thinking did she knew that Rishabh got kidnapped? Then Kidnapper trying to wakeup Rishabh because Rishabh was unconscious. Then Preeta entered the Rishabh room as a Room service character. Then kidnappers open the door and Preeta starts beating him and starts finding Rishab in the room.

Then Prithvi is going to do something to grab Luthra’s whole property and their daughter in law Preeta or I have a better plan that in my one hand Sherlyn and on the other hand Preeta baby. Fantastic

Then someone locked Srishti’s room then she thinks is her mom should be locked in her room because maybe she listened that she heard that Preeta on a Luthra’s house and they all are going to take Preeta. Oh god why this shit always happened with me. Then her alarm is ringing she tensed about Preeta she didn’t call back in 10 minutes.

Then she is calling Sammy and Sammy was in a bathroom and Karan picks up the Srishti’s call. And tells everything that Preeta was in trouble and told not to tell Karan’s about Preeta Di because she’s trying to save Rishabh from kidnappers because Rishabh got kidnapped when she was in a market and from now she is chasing them and reached hotel room where Rishabh is kidnapped. I know the exact location room of the Hotel and I am stuck in my own house’s own room. Sammy, I am so worried about Preeta she didn’t call me back from 10 minutes.

Then Karan asks where are Preeta. Srishti says what was happened to your voice Karan says My voice is down then Sristi says no I know this voice is Karan’s tell me the truth I know you are a Karan sir. Yes, I am a Karan. Srishti says I know you are a Karan sir then he says if you know everything then why you should not tell me before did you know? how many complications being created just because of you. She says I called you but you don’t pick up my call then they start fighting on some talks. She says thank god my sister is not like you Stone-hearted. My Sister always helps Luthra’s in the past and also in the future unlike you.

Then kidnappers call to his Boss and you will shock his Boss is Prithvi. Kidnappers tell Prithvi everything about Preeta that a girl who is chasing me when I kidnapped Rishabh and followed me in this hotel. and starts fighting with me but I will succeed and I kidnapped it also. Then Prithvi praising his kidnapper’s work and say nice you are genius and also said that girl knows our plan and now she has to die. He asks his kidnapper to kill her to throw her from the Balcony. And people will think this was suicide. And Says I will give you more money for this. He ready to do this.

But when Prithvi sees that she is Preeta then he tries to deny him. She is my Preeta. Kidnappers say give me 5 minutes to finish this girl. Prithvi says don’t do anything with this girl. If you do something bad with this girl I will kill you. And throw you from Balcony instead of that girl.

Now change your location from the 6th floor to the 9th floor Luthra’s will come soon.

Then Karan’s start finding the way to save his brother and Preeta. Then he decides to go to the hotel from the window. He says Preeta always trying to take attention from me but My name is Luthra Mene jo Ek bear than li to Matlab than li.

End of the Episode.